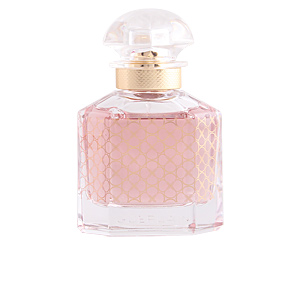 MON GUERLAIN Limited Edition by Guerlain is a women's “Eau de Parfum” that is included in the Woody Oriental family. We are facing an exquisite cocktail in which the enigma and sensuality are tinged by an aura of sweetness, thus creating a trail that represents the current woman, without fear, with an innate strength and that proclaims her freedom to the four winds.

This edition maintains the same essence as its original version, it only modifies the aesthetics of its bottle, which has been meticulously decorated with the detail of the bee panel, very present in the company's products. Thus, Guerlain decides to reinvent one of its classic fragrances, coating it with a renewed bottle that reinterprets the emblematic codes of La Maison using golden ink.

Its wake is made up of an exclusive set of excellent quality raw materials. It begins with a fusion of lavender and bergamot, fresh and clean notes, in honor of freedom. Next, her heart envelops us with a bouquet of jasmine sambac and irises, in which softness and absolute femininity come to light, to guide us to a background formed by Australian sandalwood, Tahitian vanilla and curamine, a total explosion of sensuality and subtlety.

MY INVISIBLE TATTOO, MY PERFUME, MON GUERLAIN. This is the emblem with which Guerlain announces this new fragrance, thus defining its aroma as a tattoo that marks our skin, an eternal, indelible tattoo that leaves an infinite imprint.

ANGELINA JOLIE. She has been chosen to represent this perfume. A woman with a punch that combines all the characteristics that this creation aims to convey to us, beauty, femininity, strength, freedom and impeccable delicacy.

LIMITED EDITION . We are facing a limited edition, so that when its stocks end it will no longer be marketed. Do not miss it!

BLACK XS FOR HER
Eau de Parfum for woman