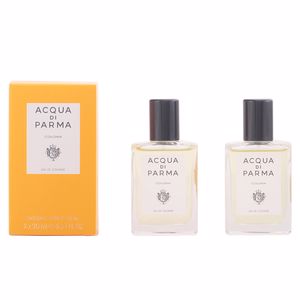 COLONIA 2 Refills by Acqua di Parma is a men's “Eau de Cologne” included in the citrus family presented in two sprays of 30 ml each. This fragrance, with more than a century behind it, is characterized by its refreshing notes as it marked a turning point regarding the trends of those years, dominated by intense aromas and of great voluptuousness.

This perfume, dated in the year 1916, has become today a classic benchmark in the world of perfumery, and is considered 'the first Italian cologne' since most of its ingredients come from that country. It is a luminous and natural aroma that expresses the purity of the Italian lands, its bergamot fields, its noble woods, its Mediterranean waters ... A creation that continues to seduce beyond the years and fashions.

2 x 30 ml . These are two 30 ml vaporizers each perfect for traveling, which also allow us to fill them as many times as we want.

COLONY OF THE ITALIAN NOBILITY. In the year 1916, there were many members of the Italian nobility who went to tailors to tailor their clothing. Therefore, they were the first to be able to enjoy this delicious aroma.

TIMEless CLASSIC. Its fresh and citrus essence makes it a classic that has been among the most desired selective perfumery products on the market for years, also due to its timelessness.